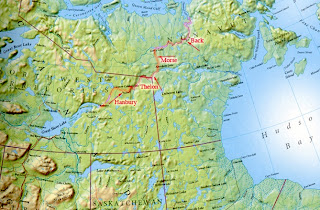 (Click on any photo to enlarge it!)
For those who think the Arctic is remote, removed, cold and difficult to travel to, there's always the sub-Arctic, the areas known as tundra. One of my favorites is Thelon River, which starts east of Yellowknife, Northwest Territories, Canada, and flows all the way to the Hudson Bay. It's very easy to get there: you just sign up, show up somewhere, and board a little plane with a few other adventurers, and you're there, landing right on the water! 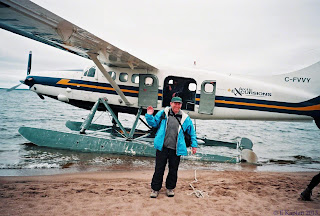 Many people take a couple of weeks to canoe down the river, and that's something I'm committed to doing some day. My last trip there, though, was dedicated to scouting for Arctic wolves, the magical spirits of the region. Of-course, there are other wildlife at Thelon, like this sub-Arctic hare trying to make the day (and following night) without being eaten. 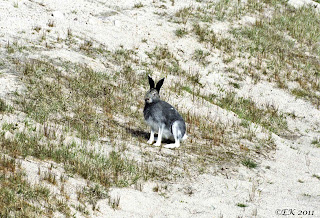 Sometimes she succeeds, sometimes not, as we'll see later.

The Thelon River Sanctuary is beautiful and one of the things I like about it is that for hundreds and hundreds of miles you see the same view - And it's beautiful! 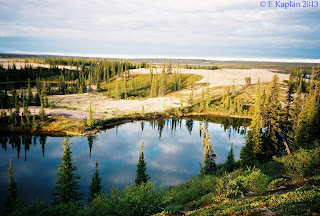 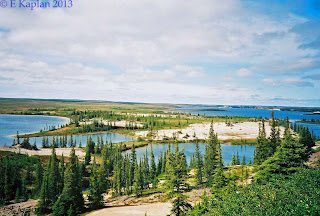 The Arctic Wolf is not in the business of showing up just because there's a guy with a camera standing by. It's a very territorial predator and in this region one male wolf can occupy an area of 20 by 20 miles, rarely belonging to a pack and often hunting alone or mating with another wolf of the opposite sex.

So what you do is typically sit on a hill, waiting for one to show up, and as time passes you convince yourself this is going to be the most impressive showing up on earth! And what can I tell you - It is. 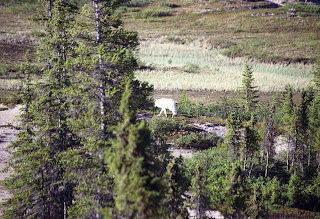 As I've mentioned, the Arctic Wolf in Thelon is solitary. And as the tundra gets its green back as Spring advances, the wolf keeps its white coat  - It does not need to hide itself; at night, when it's on the look for prey, the color won't matter! 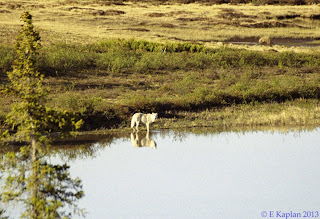 When it's not traveling its territory, the Arctic Wolf will typically spend time at its den - the place it dug for the winter, for mating, and for keeping the little pups until they're grown. Here's what an unoccupied den looks like: 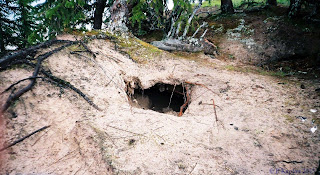 So, dens are a sign that wolves occupy the general area. Sometimes, though, the signs are a lot more explicit! 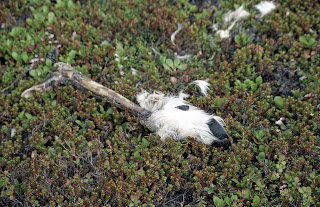 Ouch!! That must have hurt! Well, somebody has to be lower in the food chain.

But there are animals, herbivore and stupid as they might be, whom even the Arctic Wolves will almost never dare to fight. Meet the Muskox, one of the most ancient animals of the Arctic, a massive, brainless, and very powerful animal: 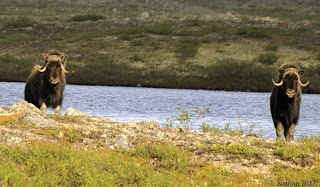 The Muskox are believed to have a direct line stretching back almost 200,000 years ago, following a migration from Siberia to the American Arctic. You can see their long and curved horns, and they are VERY effective using them to defend themselves.

So, even in areas like the sub-Arctic, where the wold and bear rule, there's a full spectrum of animals who have adapted, and a beautiful scenery to accompany that.

Read more about the sub-Arctic spring in my post Goodbye, sub-Arctic Winter!

I am mostly an anti-gun person but in light of this story I hope you travel with one, Eyal!
Peter S.

Amazing pics, especially of the den and the remains, be safe!

"Many people take a couple of weeks to canoe down the river, and that's something I'm committed to doing some day" - Will you please let me know ahead of time... :)