Sayings I picked Up In Arctic Norway 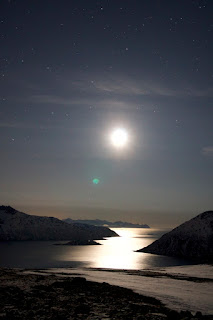 So I just got back from a 12-day trip to Tromso, Norway. Tromso sits 350km (200 miles) north of the Arctic Circle. You'd all imagine it looking like the photo above, right? That's understandable given that on the day I landed there, sunrise was at 10:52 and sunset - 13:02. Just four days earlier the sun didn't rise at all, and hadn't done so in almost two months. In times like that, no wonder the moon dominates the sky like in the picture above! The days get longer rapidly, though - Consider that by June, the "midnight sun" never sets!
And despite that, the residents of Tromso, which has a large university, seem happy, normal, and generally claim that winter is the best season. So I decided to check it out! Doing so, I picked up some sayings by the local folks.

Norway wasn't created so that you sit on your butt
Norway is basically mountains and fjords. And some islands. It's an outdoors heaven and there are lots of fun things to do, like taking your dogs on a walk up and down the mountain! 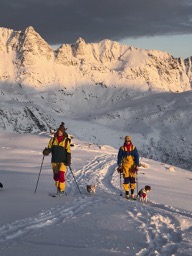 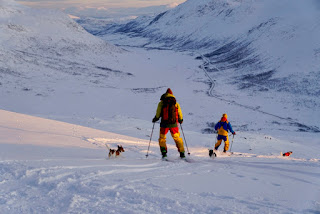 And it pays. There might be only a few hours of light in a day. The sun, which is officially out for 2-3 hours, is so low above the horizon that you mostly see the color it inflicts on the sky above and the ice below. Boy is it worth it. 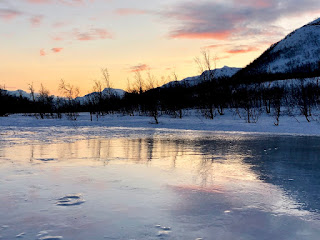 There's no bad weather - There are bad clothes
I guess that's a healthy approach to take when the temperature is -5c to -10c (23-14F) for many months, and with even a gentle wind - much colder. But look at the positive side: the weather in Tromso is regulated by the Golf Stream which keeps much of Northern Europe warm. Drive two hours inland towards Finland - and the Temperature in likely to drop to -40c/-40F.

During the week I was there, the Northern Lights Film Festival took place. So all the people wore their Good Clothes, and at 3pm, at -8c/17F, took their kids to see a street screening of Finding Nemo: 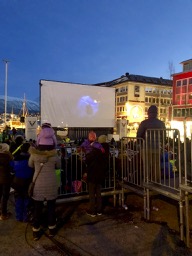 I think Nemo felt quite warm there in the tropical ocean.

But of course there were also films at Northern Europe's oldest movie theater, which was built in 1915. And those uninterested in movies could spend some time at the gorgeous public library: 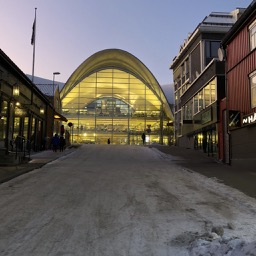 So another thing I noticed while there, was that they don't heat the houses, stores, and theaters too high (unlike in the US) - so that you don't have to strip naked all the time (that only happens in Denmark). Norwegians are fond of dressing in layers, and they love wool. The number of times I heard "We love wool" while in Tromso! There's a reason for that: wool regulates your body temperature really well and allows you to go snowshoeing and then to the movie with just a couple of layers' difference. 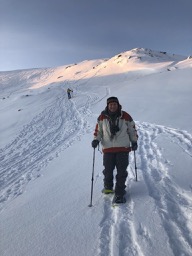 (That was a good opportunity to insert a photo of myself snowshoeing.)

Sweat will kill you
I personally suspect this saying was created by the people who make and market 100% Merino wool underwear, base layer, mid layer and what not. But I guess it has some truth to that. If your clothes regulate you body heat well - the Arctic outdoors is your playground! 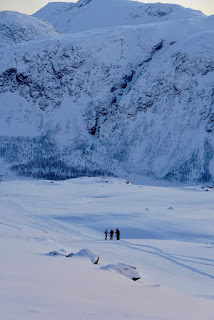 The outdoors play such an important role, that that's a saying I saw on a store's window: "A sale is like a path in the mountains: you have to know what to look for; you need to be patient; you need to be diligent. But when you find it, the reward can be tremendous - up to 50% off!" Haha. Well I guess when your view from Main street, at 12 noon, is this, you're tolerant of everything: 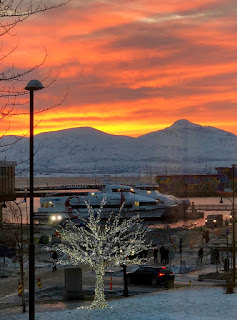 "But wait," you say, "we came here for the Northern Lights!" You're damn right. In my next post, I'll tell about them. Till then, an appetizer: 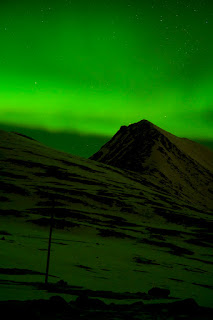