The Brown Bears of Katmai

Fish anyone?
Yes, I know - Katmai National Park is not in the Arctic, not even in the sub-Arctic. But it is such a unique place, and since it is in Alaska it's technically within the scope of our blog. Now that we got this out of the way,  what's so unique about Katmai? in one word: THIS - 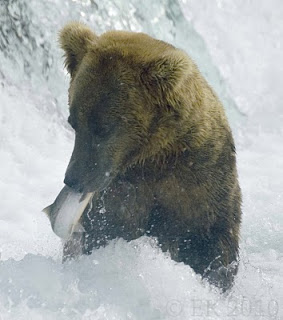 Katmai has the largest concentration of Brown Bears in North America, perhaps in the world.  There are two important reasons for that:
1) It's a national park. National parks were created primarily to conserve and protect special wildlife or natural phenomena. So the focus on the well-being of the bears allows them to prosper.
2) It sits on the Katmai River, which has a very healthy Salmon run year after year. Pacific/Alaskan Salmon has a tremendous amount of nutrients and calories and serves as a critical food source for the Brown Bears after a long winter.
During the early summer, when hundreds of thousands (and in a good year - millions) of Salmon swim up-river to where they were born and will die (learn more about the Salmon run, a natural wonder)  Brown Bears from all over the park congregate along the falls, which the fish have to jump in order to get upstream. For the Brown Bear, this is an easy meal: just stand on the fall and wait for a Salmon to jump into your mouth! In the following photo, two bears are doing just that: 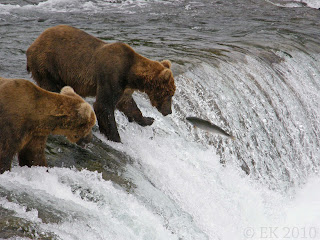 When I shot these photos, the bear on the left was very unsuccessful; it seemed as if all the salmon are jumping into her friend's mouth! Look: would you say she looks somewhat frustrated? 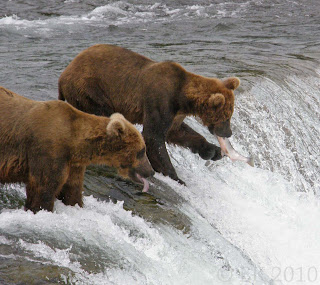 Life is tough even if you're a giant bear!
But there's more to it than that. Brown Bears, like most other North American bears, are solitary animals. They like their own territory, often 10x10 miles.  They don't like other bears around them. Here, in Katmai, the fish are too yummy, so lots of bears gather in one place to catch them. That makes them really uncomfortable. They try not to look at each other, to keep their own little space. So what, to the human outsider, looks like one big feast, to them is a party where nobody feels comfortable with the other guests: 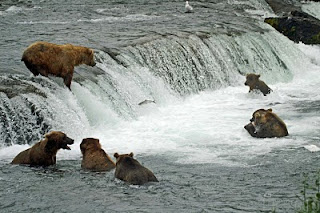 I guess it's not a party for the poor fish trying to jump the rapids!
Did you know? A bear yawns when irritated, not when it's tired. If you're interested in becoming a bear viewing expert, try this book:

More about bears in future posts. In the meanwhile, Go to My Home Page to Read Additional Posts

By the way...many animals yawn when they are intimidated and/or nervous about something. Even humans. Makes sense since tension often settles in the jaw, and a yawn is a natural body response to stretch the jaw muscles and help get rid of the tension. Take it from someone who is an expert at having a tense jaw. :)

One more thing...bears are highly regarded among native Americans. They say that if you ever come across a bear print, it's good luck and you should never trample on it. I guest that means coming across the entire bear must be super good luck!

amazing, thanks for sharing
Janet Silverman

Keep up the excellent works guys I’ve included you guys to our blogroll.
Alaska Bear Viewing