Arctic Black and White with A Story

"Every picture tells a story" - of-course a very true statement. Sometimes, the story is plain and the visual beauty of the picture is what matters most. In other times, it's actually the story that generates an interest or an emotion, while the picture only helps us visualize it.

In this post, I chose to tell the story behind each picture. And, in the spirit of dark stories, I processed these pictures into black and white, which I guess always adds some atmosphere! Plus, my last post about black and white images was very popular so I figured I should do that again. So I hope you enjoy my "creative streak" to experiment with black and white once more! I'd welcome your comments whether I should include B&W photos in my catalog!

Speaking about atmosphere, one cannot ignore the rainstorms of the sub-Arctic. When I write about the sub-Arctic, most people imagine very cold weather and frozen land. But, summer and Fall are not so cold, and the rain storms are very powerful. That's great so long as you're not under the rain and have a camera! (click on any picture to enlarge it) 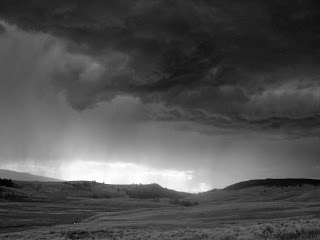 You'd prefer some sun, you say? You got it! But in Antarctica, there is no sun without ice, and they all play with the water if you happen to be kayaking on the Antarctic Ocean. Look at the picture below and imagine: you're kayaking with your eyes closed, listening to the paddle shifting away little pieces of ice in the water, while the sun warms you up. Then, you feel it's hiding away behind - Full gear in reverse! You about to crash into that iceberg! 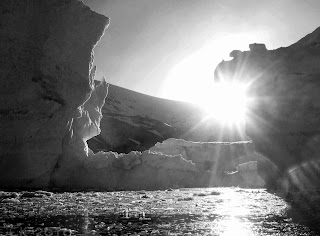 But being on the water, with you eyes closed and meditating to the sound of the wind can be done in calmer water as well, such as lakes in the sub-Arctic where you can grab a canoe, a professional model(?) and  and be the back seat driver for an hour of meditation!  Say with me: Ohm! 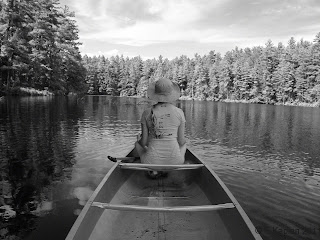 The interaction of man and wilderness isn't always so peaceful and collaborative, though. Take, for example, Svalbard (Spitsbergen), an island far out in the Arctic Ocean above Norway. during the 17th and 18th centuries, the ocean around that island was so crowded with whales that stories from back then tell about boats having to plow their way among the whales. That made it easy hunting, very easy.

The hunters would bring the whales to the shore, strip them of their skin and meat, and just leave the skeletons behind. 200 years later, this is how the Whale Ghost Town looks: 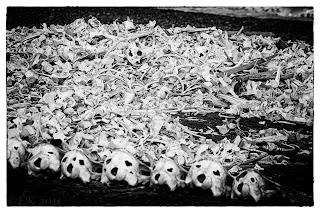 I know: this is horrible! But consider this: during the early days of the Industrial Revolution in the UK and Europe, a period which changed mankind forever--and for the better-- the oil extracted from the Minke whales was carried back to the UK and used to provide light and heat to the newly built factories. Was it worse it? No matter what your answer is, going on shore in Svalbard and getting so up close and personal clearly leaves an impression: 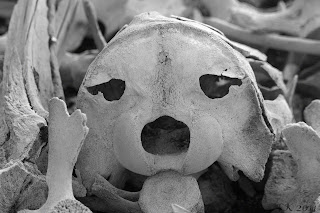 For sure, there are lots of spiritual moments in the Arctic, and I've written about them in previous posts.  Consider the following photo: a lone Polar Bear standing on a hill, sniffing.

This picture tells the story of the demise of Polar Bears. They hibernate in the ice and snow - in this case on Svalbard - only to wake up in the spring and discover this: within less than 20 years, the permanent sea ice which during summer was less than 50 miles north of them, a distance they could easily swim to, is now more than 500 miles away.
So our bear stands there, stranded, and although it can smell a seal from 7 miles away, they're too far out where the sea ice is. And so it stands there, slowly turning into a white ghost, along so many of its species: 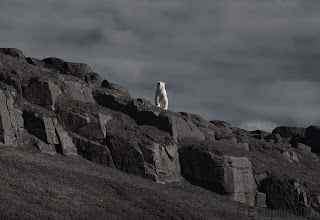 Read my post So what About This Arctic Bug?
to better understand me :)