Penguins in Alaska? Polar Bear in Antarctica? 5 Facts and Myths

1. No. There are no penguins in Alaska. Penguins are a product of the southern half of our planet. Some species reside in South America, Australia, and neighboring island. And many, many of them live long and prosper in Antarctica.  However, they are threatened even there! This is a typical summer day at the beach for them: 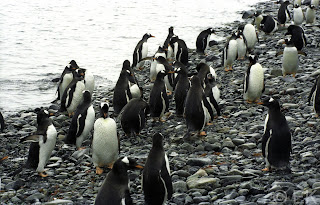 2. No again. Antarctica is a continent surrounded by ocean. The only living creatures there (including humans) are those who can either swim or fly there (guess what the humans do). While polar bears can swim, they only do it for a relatively short distance, and they are creatures of the Arctic. 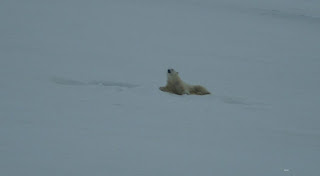 3. Is Alaska freezing in the summer?  No. Well, it’s freezing if you’re camping out and don’t wear your socks! But seriously, temperatures in Alaska during the summer are quite moderate and well above freezing. You need to get really up north in the Arctic (for example, Elesmere Island in Nunavut, Canada,) for it to be below freezing on occasion. Keep in mind, though, that summer there is only about five or six weeks! Antarctica is a different story. In the antarctic Peninsula, which is not even too far south relatively speaking, it can easily snow in the summer. See the weather forecast in the right column.
4. Do penguins fly? Well, sort of. Penguins have lost their ability to fly in the air. When they jump into the Antarctic Ocean from a cliff, they dive like a rock. However, they do not really swim, either. Technically, penguins fly in the water - they use their wings in flying motion to get to fish, their next stop, or the supermarket. They can do it quite fast, and underwater most of the time!

5. What color are the fish in the Antarctic Ocean? Most of them have no color, really. You see, in a freezing ocean there’s so much oxygen in the water that the resident fish do not need red blood cells to transfer it - it is naturally absorbed in their blood. Hard to believe how one looks when their blood is not red - the fish’s skin just looks pale transparent and you can look inside! Some brave (=crazy?) divers actually travel all the way to Antarctica to watch them. Can you imagine that?!? Here are some divers I photographed on a trip by Aurora Expeditions: 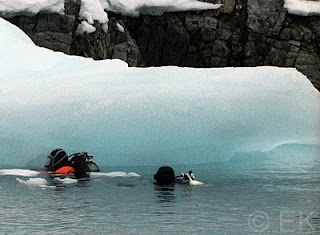 Well, there are many more interesting facts about the Arctic. Visit my blog again for additional writings!


Go to My Home Page to Read Additional Posts

Useful info. My daughter asked me if there were polar bears in antarctica. I had to really think about it. Thanks for sharing your knowledge on the matter.

Thanks! Many much older people than her wonder about that! Glad you like it - Show your daughter some photos!