So What About This Arctic Bug?

First, a personal note: my blog is celebrating two months since I started publishing it, and thanks to you it has been a great experience! The number of email subscribers is going up steadily, and ever since I incorporated RSS feed subscriptions it has been amazing to see how many people use it to read my blog from so many different applications! (How's that for a venture capitalist? I "can speak the language" and I "understand the technology behind it"!)
Since I started only two months ago, the site has been accessed thousands of times, from 12 different countries. Your feedback and comments have been so satisfying to read! So please, keep giving them, and keep spreading the word to friends and colleagues. I have many more pictures to show and stories to tell and will keep doing so. 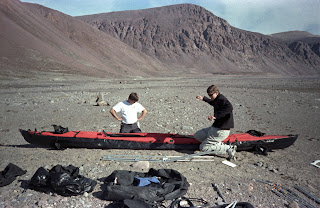 Why am I doing it? What makes people go to the extreme north, assemble their own kayaks, and set on a two week trip in complete isolation? Because there is something about the Arctic and Antarctica that I think has the potential to touch anybody. We all know that there are many beautiful areas on planet earth, but the polar regions are where the raw, historic beauty is kept the best. These are the places which during the long winter have challenged man to survive through collaboration with the climate as opposed to turning away from it. And during summer, I have found it to be a place where the isolation allowed me to get some perspective on my life back home. (click on any photo to enlarge it) 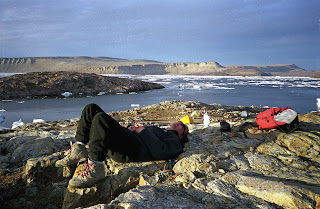 Not a bad way to reflect, isn't it? In a subconscious way, ice and snow have always been magical to us. Here, in the Arctic, they are your main company for thousands of miles around you (except for the few people who travel there at any given time.) Recognizing it has allowed me to better understand my feelings towards my loved ones back home; and the pristine views, quietness, and remoteness have always mellowed down the negative feelings I would carry about work, politics, and other people. There is something almost spiritual about a view like this: 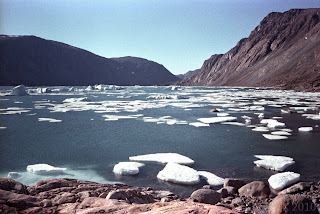 Not to mention that you know you'll soon be kayaking these waters!
The arctic has also shown me what is happening to our planet. An ocean that just a few years ago looked like this in mid-August: 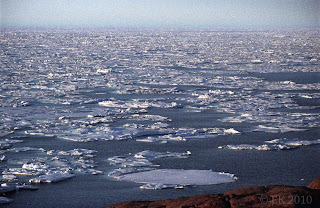 is now devoid of ice for hundreds of miles further north (preventing us from kayaking this incredible maze!).
And Polar Bears, the kings of the Arctic who once followed the ice during summer to feed and stay cool, are now forced to try and swim many miles to catch it, or - even worse - are stuck on bare land with their prospects of surviving the summer quite slim: 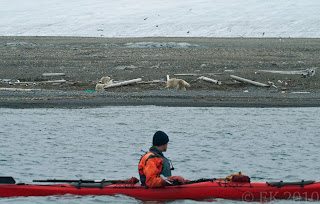 This is the story of global warming in a very specific way...
Is it tough to kayak the Arctic? In fact, it's not as extreme as most people would think. The ocean is mostly very calm, and while one would need some level of fitness, in all my trips there have been people older than 65. No wonder I'm excited: I've got so many years of doing this if I stay in good health! And in the end of a long day of paddle, what can compete with this view of The Land of The Midnight Sun? 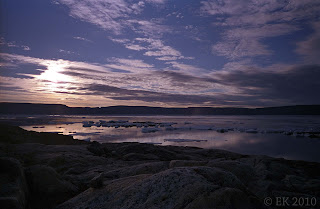 To read more about the Arctic, see the list of other posts on the left hand side.