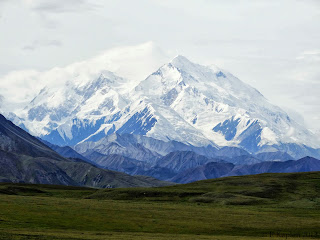 Would you rather climb the highest mountain, or the tallest one?
Perhaps you don't know the answer, but certainly the crowd wisdom calls for the highest one - Mt. Everest. With its peak at 29,035 feet (8,850 meter), Mt. Everest has been the prime target for mountain climbers, professional and novice alike.

But, let me argue here that the Real Thing is Mt. McKinley in Alaska.  True, Mt. McKinley's peak is not the highest above sea level, at 20,320 feet (6,194 meters). But hey - it's not like you jump off a boat at the sea and start climbing! What matters in mountain climbing (for those who seek the achievement of-course) is the vertical rise - from the base of the mountain to its peak. Mt. McKinley has a vertical relief of 18,000 feet, climbing above a 2,000 feet high plateau, while Mt. Everest's vertical relief is only 17,000 feet (what can I say - they planted it at a high place).

I have fulfilled my official obligation now, to call this mountain Mt. Mckinley. Locals, including the Alaska State Government, call it the native Athabascan name: Denali - "The High One" - While the Federal government insists on calling it McKinley - its old official name. No wonder Alaskans hate Big Government - and click to look what that brought us!  Ahh.

Denali sits on top of Denali National Park. The mountain is so big that it creates its own climate, so it could be warm and sunny throughout the huge park, and cloudy, cold with snow showers on the mountain. Because it's far north and has low barometric pressure, it has much less oxygen than other prominent mountains, and as a result acclimation for those who climb it is much longer. The average climb time on Denali is three weeks! And only about 50% of those attempting to reach the summit make it.

Happy Birthday, Denali! This past summer it's been exactly 100 years since the first official climb all the way to the top. The youngest climber has been a 12-years old kid and the older - 78. To celebrate this, this summer a full 68% of climbers made it to the top.

Now, back to us humans. The rest of us can enjoy the views of Denali while traveling Denali National Park. The huge park - over 6 million acres - has only one road in it, on which mostly park-ran busses travel. 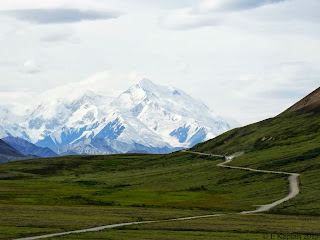 But, a better way to explore the park, its vistas, vegetation, and wildlife is by foot. Here I am demonstrating that even ordinary people can do that: 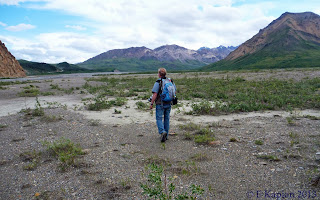 Not convinced yet? Here's my son, 14 years old, demonstrating that anyone can disconnect from Facebook and Instagram and do that! (Yeah, we asked the huge Grizzly bears to stay out of the picture) 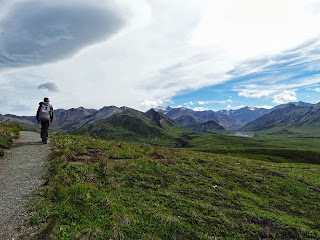 (my photo is courtesy of him, of course)

While hiking Denali, you can look not only for wildlife (see my recent post), but also learn of glacial activity. The mountains of Denali are covered by glaciers, and during the summer some of the ice melts, and glacial streams carry with them rocks that have been pressurized to dust under the enormous weight of the glaciers. These streams look dirty! And of-course, no fish can survive in them because it would get Asthma in a millisecond!  Here's a photo of a glacial stream meeting a freshwater stream, to demonstrate this: 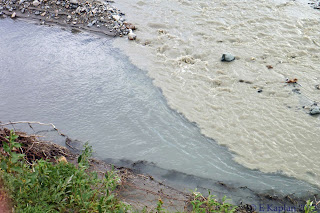 For the real adventurer in you, there's an alternative way to travel the park: 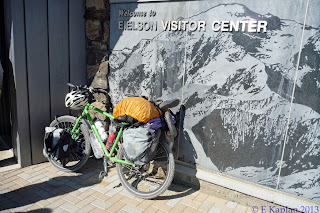 After all, the Denali Park Road is only 91 miles long so it's not a big deal. Yes, you can bump into the occasional Grizzly Bear or Moose who decide to check you out, and then you have to pedal really, really fast (don't do that). But on the other hand, it's a great way to cover the territory personally and explore the various parts of Denali over a few days.

BUT, and this is a big but, not only people do Alaska park hikes. The following picture is one of my all-time favorites. (obviously because I was on the right side of the camera!) I shot it at another Alaska National park, Katmai, and I call it A Walk in the Park. 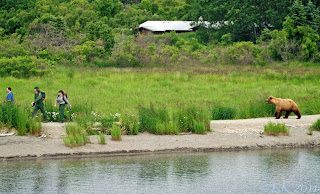