Seal With A Kiss 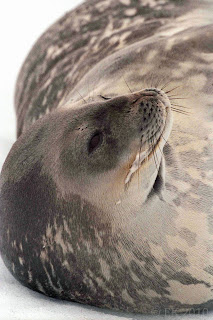 I'd say we're witnessing some sweet dreams here! (click on the photo to enlarge and see this seal's dream about a big, yummy fish)

So, what is it about seals that makes most people, adults included, react with immediate fondness and the sense that a seal is as cute as a baby? Well, maybe because they do look like babies? For example, here's an Antarctic seal taking a nap: 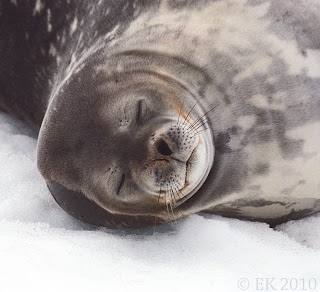 Doesn't it look Oh So Cute? Do you notice something strange about this seal's nostrils?  Seems like one is wide open! Well, true. Arctic and Antarctic seals use their nostrils much like a dog uses its tongue - To control their climate. When it's really cold, they shut both; really warm: their nose is wide open. Here, it's moderate (was only about -1C, or 30F on that day... "Moderate", you say)
Of course, not all seals are so charming. For example, this Elephant Seal, whose photo I took after landing on the shore of the Antarctic Peninsula, is anything but gentle: 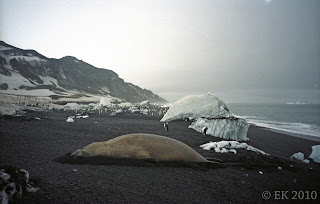 I guess it is gentle in his or her own way, but look at the landing marks it left on the sand! No wonder the penguins are keeping their distance! And there's the Leopard Seal which is a real bad guy.
Seals are kind of in the middle of the food chain. They love fish, but are preyed on by whales. In the Arctic, they are also the favorite food of the polar bear, which is way up there at the top of the food chain. They love resting and sunbathing on little floating icebergs and sea ice. But they also know that a polar bear can smell them from up to ten kilometers and swim very quietly behind them and get them while they're sunbathing. So they always have to be with their ears open: 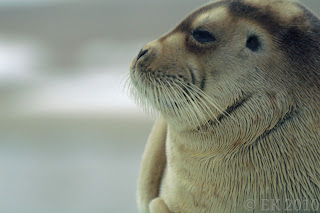 Here's an idea for a start-up: ear plugs for seals! Well, I guess not: they need to have big, 360 degrees hearing to watch out for those polar bears and whales. We'll toss that business plan out.


So, they lie on the ice, with one eye and two ears open. When a kayaker (one of those crazy guys with nothing better to do on the Arctic Ocean) gets near, all they care about is whether it's a bear. 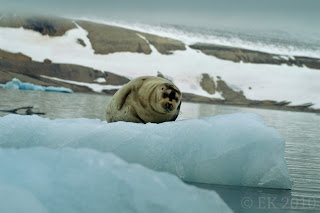 Considering yourself as not a bear? You can silently paddle your kayak until it hits the patch of ice, replace your Super Zoom Lens with a close distance one, and take some portrait photos: 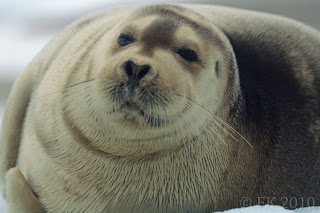 Then just go about your paddle, looking for other wonderful things.
In case you missed it, look at the cool pics at The Tips Of The Icebergs

Wow! Great pictures! Waiting for the next ones!