The Beauty In The Beast 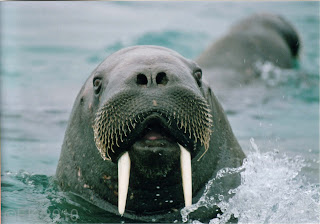 Boo!
So you're kayaking on the Arctic ocean, feeling a bit tense because your guide has told you Walruses can be, well, a bit territorial. You watch them on the ice-flows, and suddenly, right inside your camera lens, you see a face. You then:
a) scream and turn to get away, only to see that the kayak is not that stable and Swimming with Walruses isn't exactly Dancing with Wolves. (and you're not Kevin Costner, but that's another story)
b) drop the camera into the water in panic and paddle back as fast as you can
c) press the button many times so that at least they know what you did in your last moments


Walruses are the beasts of the Arctic ocean. Ancient animals, they often weigh more than a ton and can be 3.5 meters long. Their grizzly whiskers are easily noticeable, just as their long, white tusks are.
Why on earth would evolution give them these whiskers if not to freak everybody out? Turns out, the Walrus uses its whiskers primarily to look for food. You see, one of their favorites is shellfish. Back in the days where France was an empire, there were French restaurants all over the Arctic. But now, the Walrus has to dive to the bottom of the ocean, sometimes as deep as 700 meters, and look for shellfish there, in the darkness. The Whiskers are very sensitive and in fact this is how the Walrus finds its food - dragging it over the bottom of the ocean!
Of course, this adds to a very scary look. So after this guy from above Booed me, he turned his back to me and swam away. Then, he looked back with this "stay there and don't mess with me" stare: (click on any photo to enlarge it) 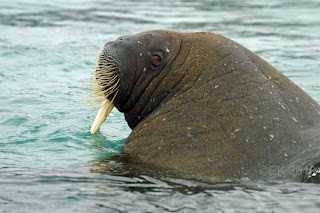 I did (stay away) and I didn't (mess with him)
What about the tusks? These, in fact, help the Walrus make its life in the tough Arctic ocean a bit easier. He uses them to drag himself out of the water and onto floating ice, to crawl on a sandy beach, and of course, to beat the hell out of any other Walrus who tries to flirt with his mate. (We're talking males here. The females just bite and scratch.)
On occasion, the Walrus will also use their tusks to check how strong your inflatable kayak is. Sometimes it not strong enough. That's why a good, experienced guide will never take you too close to Walruses, especially not during the mating season. 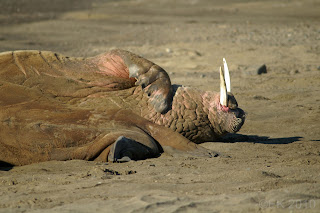 Walruses are very social animals and they like to lie next to each other on the ice or the beach and catch some sun. Unlike most politicians, they have very thick skin. In fact, it's so thick that even the world's mightiest predator, the Polar bear, does not mess with them.
Look at the following picture: This Polar bear, which was very hungry, stumbled upon this bunch of Walruses on the shore. It came close to check them out, see if there's a sick or young one there. The Walruses couldn't be bothered: they literally did not even bother to lift their heads and look at the bear. They just continued sunbathing, knowing there was no way for the bear to even scratch them! 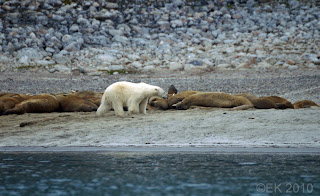 Who says kayaking in the Arctic Ocean isn't fun? (bears can't swim as fast as a double kayak.)
It is actually quite an experience being so close to such huge, imposing animals. they can be very scary and ugly: 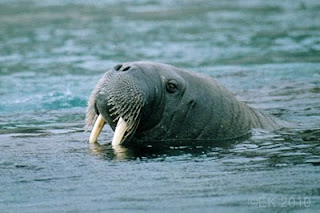 But, on a sunny day, when everyone feels a bit elated, and the Arctic does not seem so remote and cold and gray anymore, even that beast can look beautiful: 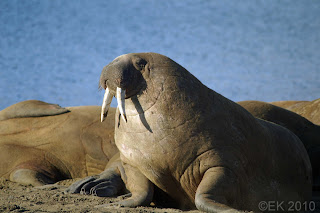 Read about my recommended books about the Arctic
in my previous post.