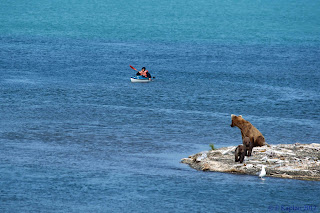 Click on any picture to enlarge it
So, just back from Alaska! Isn't it nice to kayak the that? (so long as you can paddle faster than an angry Mama Bear that is)

From a wildlife point of view, summer is when many things happen. On the Alaskan Peninsula, a lot of it is driven by the return of Salmon to their birthplace, in order to reproduce. We'll talk more abut that in a future post.

This post is the story of a mother bear and her three cubs, born only several months ago. I was lucky to be able to run into them (from a safe distance, of-course!) over the several days.

Summer is also the time when Mama Bear emerges from winter hibernation with her cubs. A Female bear becomes pregnant in the late Fall, and in fact gives birth in her winter shelter while she's hibernating! Who needs Epidural in this case?!? Most typically, she has two cubs. Sometimes she'll have only one, sometimes - three. The cubs are born very small. Relative to human size, it's as if a woman would give birth to a baby the size of her thumb!

But they nurse quickly, doubling their weight every day over several weeks. When the mother's milk resembles high fat Cottage cheese more than milk - no wonder! Then, by early summer it's warm enough, and - more importantly - the Salmon are back!

And by that time, the cubs are cute enough for Mama Bear to stroll the forest and the river bank with them! 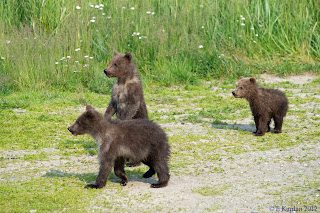 Cubs spend two summers with Mama. In the first one, she mainly feeds them fish, but also teaches them to swim and look for places to catch Salmon. In the 2nd summer she watches them practice. by the end of it, they're on their own. Their survival will depend on how well they learned! Mama will be busy getting pregnant yet another time, and most likely, she'll never see her cubs again. Sad.

This post focuses on the first summer of Mama Bear with her cubs. I shot these photos at Katmai Nat'l Park, where many bears come to Brooks Falls to easily catch the poor Salmon swimming upstream. Here, Mama Bear takes her cubs to the river: 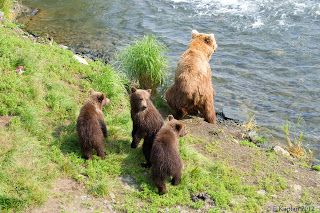 She tells them "Now, I'm going to catch a fish for you. You just wait here and watch me. Today, I'll climb the falls and show you how to catch a jumping fish." 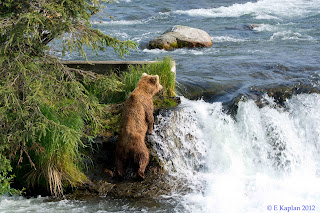 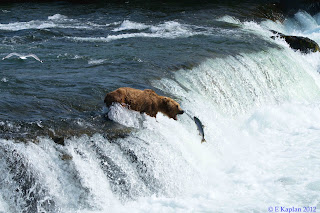 Good catch, Mama Bear!
But a female bear is no Jewish Mama. There's no such thing as "Oh, poor kids of mine - you eat first, you must grow up! I'll eat the leftovers!" The mother bear knows that without her, her cubs won't make it till the end of the week. (Grandma is no longer nearby) So first, she feeds on the Salmon she caught. Only when she's satisfied, she'll bring one to her cubs and let them share. 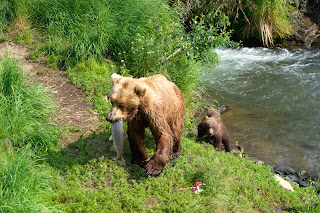 Over time, the cubs will gradually start catching fish themselves, initially in shallow water and then in more challenging environments.

Catching Salmon is an important, and crucial, lesson. But the most important one is how to identify clear and present danger, typically in the form of a large, hungry male bear. He could kill the cubs in a heartbeat, usually just to neutralize potential future competition! Watch this short video clip (shot only because I have very good instincts!) to see how alert Mama Bear is when it comes to keeping her babies safe:


Read my post Sumo Wrestling in The Arctic to get another perspective on bears.