Frozen Creatures of The Arctic and Antarctic Oceans 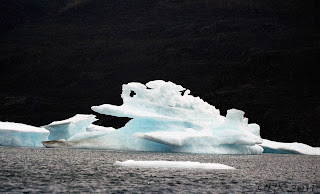 (click on any photo to enlarge and enjoy its beauty)
An airplane? A Dragon?  The mysterious Arctic Dog lying on a missile waiting to be launched to the North Pole? As we stroll (by kayak, that is) far up the Arctic Ocean or down the Antarctic one, we're guests at Mother Nature's sculpture gardens. She carves not in stone, but in ice. She uses all her hands and their extensions: the waves of the frozen sea, the wind, and the sun. Often times, we feel like at a modern art sculpture garden; today, we'll visit the children section.
I have shown these pics to kids in the past, and have always been amazed by their interpretation of Nature's intentions and creativity. So let's join them. Feel free to post your interpretations in the Comments section at the bottom - Let's see what we get here!
We start with a simple one: 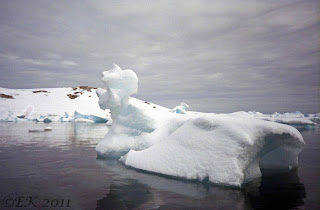 Was there some fairytale book floating on the ocean all the way from Australia, until it got to Antarctica and ignited the imagination of the wind?
And is it waiting for the final battle with his fiercest enemy? Or are they going to play together? What do YOU see there? 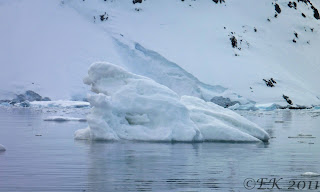 Now, to give some background and food for thought: these photos were all taken while kayaking. Those of you who have followed my blog may recall that my most precious companion (not to insult anybody who has joined me on a trip) is an orange box called Pelican Box  Their boxes and cases are used by photographers, expeditioners, and the military to carry sensitive equipment completely waterproof and airtight.


On every kayaking trip I've taken in the Arctic or Antarctica, the Pelican box is my companion. I tie it with bungee cords to the kayak just in front of my seat. Inside it is my SLR/DSLR camera with a good zoom lens. As the camera is very susceptible to seawater, it's critical not to expose it for too long to the wind and spray. This has determined my photographic style: "shoot from the hip"" I see something that consciously or not seems intriguing; I open the box; I point and shoot; I return it to the box to keep paddling. Only later, do I notice in some pictures their uniqueness.


Look at the one below: I can see a little nice surprise at the bottom - Do you? 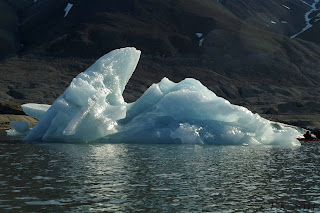 What business does a cow have swimming in the Arctic ocean with only its head above the freezing water?!?!? (OK, maybe it's a dog)

And finally, in the next photo I see one of us, the ancient Guardian of The Antarctic Ocean on his watch, looking tortured as he awaits to be freed from the giant iceberg his head is glued to. 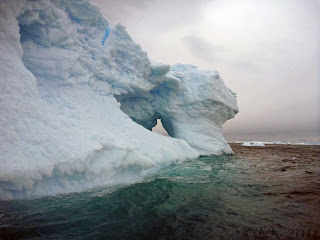 What do you see?


For more reading on the beauty of the frozen oceans, read my post Sea and Sun and Ice

Thanks Eyal. As always, beautiful photos (especially the white birds in the snow).

one before last pic - Snoopy lie on his back -taking sun bath.
Last - Rosh Hanikra - the elephant leg - frozen