Sumo Wrestling In The Arctic 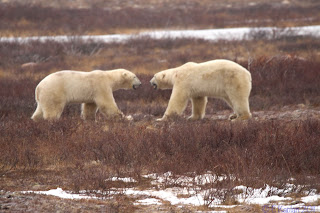 Ever seen two teenage boys filled with adrenaline (not to mention other hormones), bored at the schoolyard? Looking for a reason to rough it up, scuffling, then being friends again?
The days in Hudson Bay before the ocean freezes up but when the signs for it are all around, is a very special time for the Polar bears of Churchill. They have survived close to five months without food, the males mated (or fantasized about that) with the females, and now, as the freshwater ponds and springs freeze, they know their time to dine again is just around the corner.

Bears in general are solitary animals. Whenever we see a bunch of bears together it's either because there is a lot of food in one area which they need to share, or because they prepare to get on the sea-ice in one particular place. So when they do get together, it's a great opportunity to bring their adrenaline levels even higher, show who's stronger, and spend time. 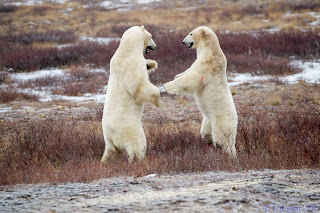 The younger males like to fight. That's a much better way to stretch their muscles than do Yoga like the older bears! But keep in mind - a healthy male, even after five months of fasting, may weigh over 1,300 pounds (625kg), and when they stand up, can tower as high as 10-12 feet (3-4m)!
Then, they charge at each other: 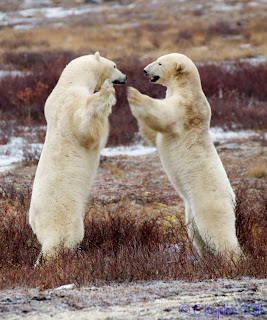 Make no mistake: this is neither ballet nor slow dancing. Not even American football. This interaction is forceful, powerful, and aggressive.  Yet, at the same time it is gentle in the sense that they do not really mean to kill each other. watch this bear's tooth near the other one's mouth - Can you imagine being seriously bitten by it? (click to enlarge) 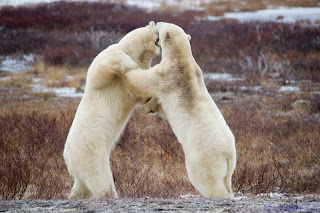 Sometimes, even the naked eye can see who's dominating the fake fight - just looking them in the eyes: 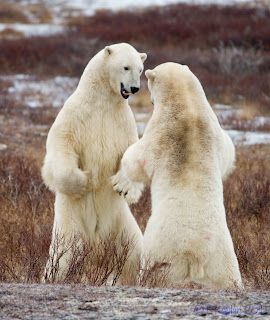 "But, so long that we're fighting, we should try some Sumo wrestling!" Yes, the Polar bears know not only how to take advantage of their height, but also of their sheer mass and strength, and so on occasion one sees what can only be called Sumo Wrestling in The Arctic. In the two pictures below, notice the "dynamics of the fight" - Can you tell who's winning? 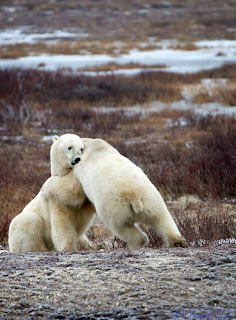 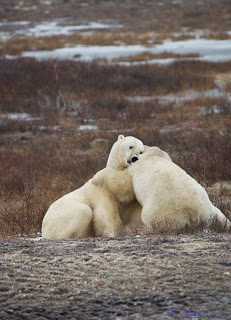 However, in the end all the Polar bears care about at that point is the upcoming seal hunting season, so they end the game with  a friendly, yet "let's be sure who's stronger here" Give Me Five 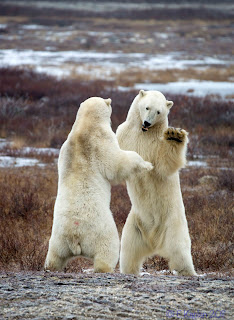 Read about The Brown Bears of Katmai in my previous post

In some ways it's sad. It's like watching a wooly mammoth.

Maybe my eyes are not that good anymore, but to me they look like smiling most of the time :)