Give Me Love! (Or at least a bear hug) 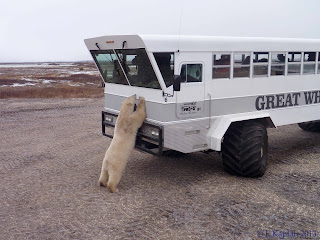 (click on any photo to enlarge it)
Is everybody looking for love? Some people, when seeing the picture above, think the bear was just curious; others think it was hungry. I say - When you're out and freezing, about to walk on sea ice for six months on your own - You're looking for love. Or at least a bear hug. 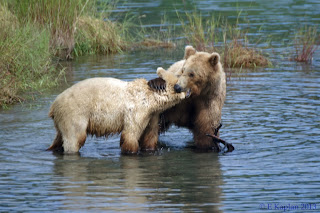 That depends on whom you're asking. A language observer, probably a woman, defines it as "a strong, hearty embrace, typically between two men;" a Wall Street hotshot defines it as "an unsolicited takeover bid which is so generous that the target is unlikely to refuse;" a collegiate sports fanatic: "a grappling clinch hold... the hands are locked around the opponent and the opponent is held tightly to the chest." Hmm... And the Geek Version? "a literal bear hug is an undesirable phenomenon in which a bear, able to stand upright, claws rapidly with a hugging position." 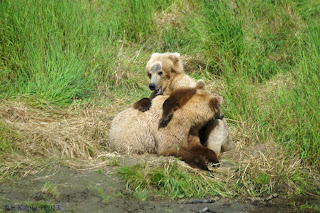 All the above definitions are taken from Wikipedia , which I guess is reliable because so many people contribute to it, although some say it's too liberal at letting definitions in.

One thing for sure - that little bear up there really wants an affectionate hug, and it shows it!

Bears certainly hug for a variety of purposes. What may look like a fight to the naked eye can be a game of affection for a couple of healthy, bored Polar bears. In the following photo, one could think "isn't that bear forcing itself on the other one, kind of a rough kiss?" 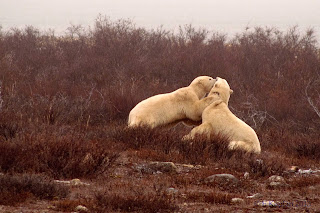 Would sure look like that if these were college bears! But a minute later, the other bear seems to show affection: 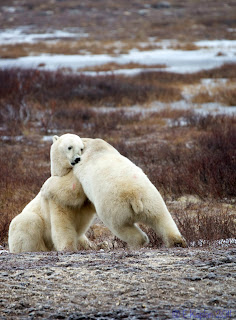 And the one on the left seems what - Shy? Just click to enlarge and judge for yourself! Hard to say that about a predator at the top of the food chain, but that's what it looks to me!

In truth, this is all probably a practice in fighting, and some exercise to get those old muscles going. Sometimes, it's training of a young cub by a loving mother-bear. Here, she's challenging him to mimic a fight, but shows him there's a limit to his excitement: 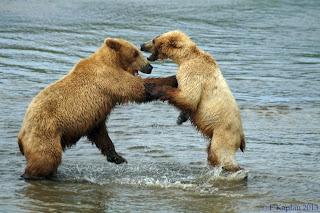 "You just stay there and don't get any closer, son!"

A bear hug can also take the form of a dance, where two giant, 800 pound (200 kilo) predators are measuring each other. 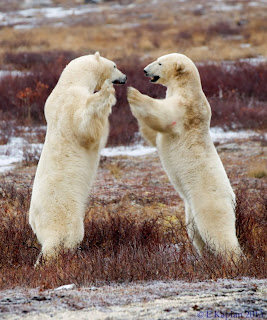 "I guess we'll just stay friends. Give my five!" 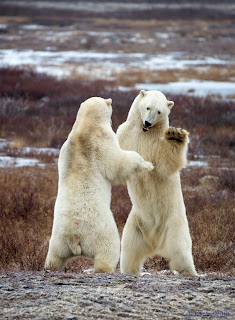 Read my post Yogi Polar Bear to see more funny pictures of the giants of the Arctic!