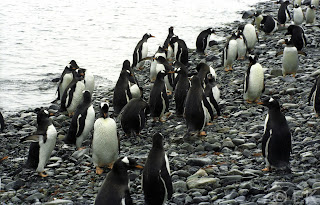 Hello everyone! I am back from an awesome trip to Antarctica. I have lots of very nice photos, fun video clips and interesting stories. I plan to gather my thoughts, go through all the pictures I took (so many that I'm ashamed to tell), and post a bit more frequently in the coming weeks.
But, nobody can take the short route from Ushuaia, Argentina, to the Antarctic Peninsula without first going through the infamous Drake Passage. Sir Drake, who in 1546 named this area connecting the Southern Atlantic and Pacific oceans, noted how stormy it was, but in fact never crossed it! It was only in 1616 that it was first crossed.
A lot has been told about the huge swell and waves at the Drake Passage. I was even emailed a video of a ship that crossed the passage on the way back a day after us and got stuck in the waves... To me, this is a ritual one must go through in order to reach the other side and explore the beauty of that continent. But - well - it IS stormy. So you'll need to go through it with me in order to qualify for the Antarctic stories!
I took the following video clip from the bridge of our ship, the icebreaker Polar Pioneer. The camera was attached to the frame of the front window, and so you should focus on the horizon and imagine how it feels to be on the ship. The clip is about 30 seconds. Now think 30 hours - That's how long it took us...

Seasick already? Well, of 54 passengers, about 45 were lying in bed and skipping meals during that time, so you're in good company. Obviously, someone had to be strong enough to get up to the bridge and shoot this video!
But the adventure is rewarding, and in the end, you get views like this one: (Click on the photo to enlarge) 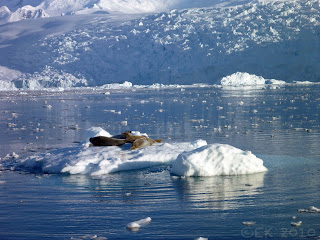 More - In a while. Sign up for an update of my next post (in the top right corner here)  - A penguin attack coming soon!

Wow. I hope the captain did not get a vertigo :-) I love the penguins pic.