Welcome to Churchill, Manitoba, Canada, the "Polar bear capital of the world!"

Well, at least I was welcome! I have just returned from an early winter trip to this sub-Arctic town of 850 people and about 1,300 bears. In fact, the bears actually live mostly in the suburbs around town, although on occasion they do show up in the city for shopping and wandering. More about that in a future post. Anyway, this is how Churchill looks in early winter, a town with no roads leading to it, accessible only by train or airplane. Click on any photo to enlarge it 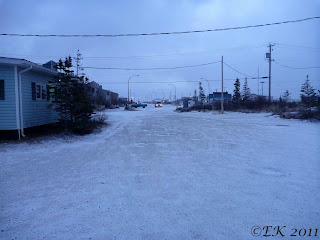 Before posting some pretty amazing bear photos, we need to familiarize ourselves with the importance of Churchill. The town sits on the shore of the Hudson Bay, which is an extension of the northern Atlantic and Arctic oceans, and penetrates deep into the continent.

Because of the direction of the currents and the winds, the little bay around Churchill (visible if you stretch your eyes) is where the sea ice first forms in early winter. Polar bears spend their winters on the sea ice, hunting for seals. In fact, winter is the season of action for them: the Polar bear is a marine mammal; it does not hunt on land and only feeds on seals, when they come up on the ice to rest or give birth. It's essentially a seasonal worker! But it takes the summer off, instead of being a lifeguard or something.
So, during winter the Polar bears spend their time on the ice, way out in the ocean. As winter nears its end in June, the ice retreats and the bears follow so that they can spend as much time on it as possible and stack up on seals. In the Hudson Bay, the ice last melts around Churchill, and so that's where the Polar bears come on land for the summer. 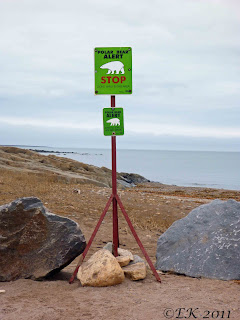 There, the Polar bear tries to spend as little energy as possible, as it will eat nothing until the next winter comes! A male bear which weighs around 1600 pounds (800 kilos) at the beginning of summer, will lose close to 500 pounds (250 kilos) during the summer just doing nothing! Like most diets, they'll regain it in the winter. The only area where there is some action is with the females, but that's for another post.

The summer is long and hot, at least for polar bears whose fur is designed for -40 degrees. But eventually, Fall comes and with it some cooling down, along with some very nice sunsets. 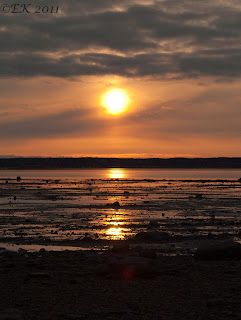 Finally in late October, winter is at the doorstep. The bears can literally smell it! As the first snows fall, and the freshwater lakes and streams begin to freeze, the bears get up and congregate as close to the shore as they can, eagerly awaiting the sea ice to form.

Churchill is the place with the largest such congregation in north America, and the official Wilderness Area is where many people come each year to watch these top-of-the-food-chain animals, who will soon be out on the sea ice, eating an average of two large seals per week. 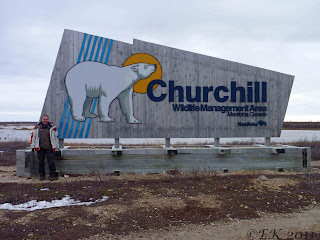 As the temperature gets colder, the bears are more excited. After being unemployed and hungry for nearly five months, they form their own Occupy Hudson Bay gathering (minus the tents), wander around with nervousness mixed with adrenaline, and demand their job back. 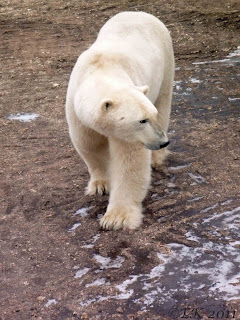 In coming posts we will share some nice pictures and stories about the life of the polar bears on Hudson Bay. In the meanwhile, read my post So What About This Arctic Bug?

Thanks for posting these wonderful essays and pictures. It gives a perspective I am unlikely to experience any time soon. The humor is a bonus too!

was wondering when you will post a new one. pictures are guaranteed to interest my toddler. :-)

Great article!! This stands true for first time hunters of any age. It’s the experience that makes or breaks their decision to continue.