Antarctica And The South Pole - Did You Know That....? Part 1 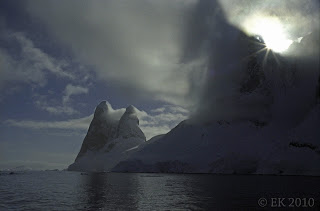 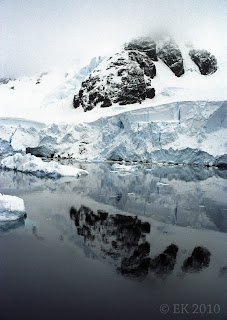 1. It’s going to be summer soon! Antarctica is in the south hemisphere and the seasons are the opposite. So when I tell people I’m going to Antarctica in late November and they say “whoa, isn’t it gonna be cold?” the answer is Yes, but not because it’s winter - It’s just cold in the summer, too! Look to your right (on the screen I mean) and you can see the current temperature in the heart of the continent.

2. Yes, it’s a continent. As opposed to the Arctic, which is by and large a continuation of our continents (America, Europe, and Asia), Antarctica is a continent, surrounded by oceans. It doesn’t even have backdoor neighbors like Sara Palin does! Shortest way to get there (other than flying) is by ship from Ushuaia, Argentina, or from Australia, depending where you’re headed. 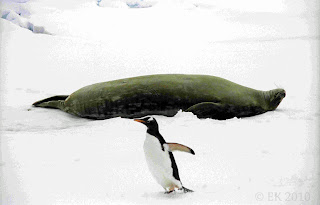 3. They have Penguins! Yes, and lots and lots of them.  And they all like to walk in front of seals trying to take a nap. Because of the above continent fact, Antarctica has very few types of animals, and each one is hardly disturbed so they all behave like bunnies (make many babies, that is.) The penguins have very few enemies. In fact, aside from Skua, a bird feeding on their eggs, and Leopard Seal, a mean, NOT NICE seal who eats them alive, the Penguins hardly ever get eaten by someone.

4. Penguins are thieves. The penguins build their little nests from little rocks they find on the ground (given that only 3% of Antarctica is not covered by snow or ice, that’s not trivial). So there’s lack of rocks in their nesting communities. Male Penguins are known to sneak behind the back of nesting females and steal the rocks. They then bring it to their female partner, blow their chest and say “look, honey, what I got for you!” In the photo below is a thief (or a caring male if you wish) I caught in action. There’’s even a story about some researchers who spray-painted the rocks of a single nest in a colony, and 24 hours later found yellow rocks scattered in nests all around the colony. Wouldn’t YOU want to get that research grant?
In the following photos are a typical nesting community, and a devoted male carrying the rock for his loved one. 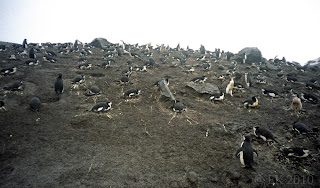 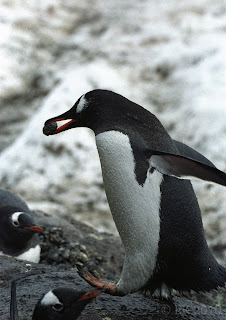 5. Antarctica is a model for treaties among nations. 47 countries, including the 12 that have significant interests there, have committed to use the continent only for scientific research, and never to have commercial or military presence and activities there. And it works! There are several research stations in Antarctica, each under the jurisdiction of a different county. You can even get your passport stamped at several of these stations by the respective nation! Stations are typically manned by geeks (six months shift) or by weirdos (two years shift)
Here I am sending a postcard from one of those stations. It reached home four months later... 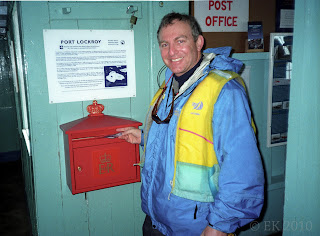 Go to My Home Page to Read Additional Posts

Fun! Was curious to know what other animals you've come across and/or typically roam the continent (now that I know it's a real continent). :)

What a wonderful way to learn and experience through your eyes distant lands......

Thank you! Keep coming back, it'll only get better :)

eyal, kudos on this. i am a follower from now on!

I love the site and so do my friends :)

No, we didn't. Your blog is amazing! I am prapearing to Antarctic cruise, it will be in december 2016, that's why i am looking for info. Do you know something about poseidonexpeditions.com/ ? Why already choose it but i can't find any reviews, only from friends.

No, I'm not familiar with that tour operator. Enjoy the trip - Antarctica is magical.