Being a Kayaking Guide - Interview with Al Bakker 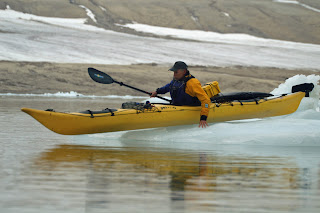 Meet Al Bakker, the owner of Southern Sea Ventures and a veteran kayaking guide. The picture above is of Al launching from an iceberg during a trip we took in Svalbard (also known as Spitsbergen), up in the European Arctic Ocean. I like this picture because I captured the concentration on his face with great timing! click on this and other photos to enlarge.
Thanks for agreeing to interview for my readers, Al. I know it’s been tough to find time for that as you seem to be glob-trotting in your kayak! Perhaps we can start by you telling us where you’ve been in the last six months.
"OK, let me try to gather my whereabouts in the last 6 months:
March – Toured a few cities in Australia doing kayak presentations;
April - Switzerland;
May – Gdansk, Poland to bring a new fleet of kayaks on board Polar Pioneer;
June - Scotland to do a 14 day Scotland /Faroes paddling trip. All the outer islands in Scotland, Faroes and then finished in Bergan, Norway. Then another 14 day paddling trip up the Norwegian coast, crossing to Bear Island and Spitsbergen in July;
August – Fiji trips;
Sept – Australia, office and sales;
Oct – Switzerland, Research paddle circumnavigating Elba, Italy."
Tired yet? Take a look at what Al was doing before launching from that ice-float: 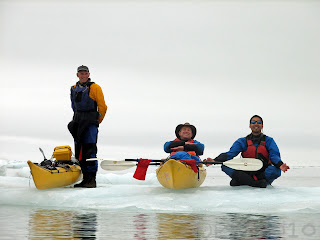 Posing with his two best kayakers ever!
How did you get to choose guiding kayaking tours as your way of living? What is it in guiding such tours that makes it so energizing?
"How does one develop a passion is an interesting question. For me, I was running and cross country skiing in my early years and then teaching and examing Nordic skiing through university. I was a whitewater paddler in those days. I watched an adventure film two fellows made of skiing and touring in New Zealand and that was it. I got a job in NZ running a Ski Patrol for 6 months in 1978. Worked winters in NZ and Canada guiding heli-skiing for quite a while and then got a job working for large adventure travel company in Australia in 1982. So... that was the start really.
Later I developed a sea kayak program for them and then took it over and ran it through Southern Sea Ventures in the late 80’s. The 80’s were a special period in Australia with many people doing a wide range of camping and wilderness style trips in many activities. I had close to 100 guides working in various activities that I managed from all over the world. All guiding for a life style so it was quite special. I still have some guides from that time who work periodically for me.

Having the opportunity to spend a lot of time in the outdoors is energizing. And being able to provide holidays where people get a chance to experience elements of it is quite rewarding. The reality is that it is work like any other job with pros and cons that you don’t perhaps appreciate when you don’t rely on the work for a living."
Now I'm getting tired! Let's see how Al relaxes and meditates on the water: 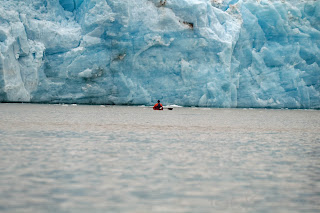 What are two of the most memorable experiences or places you have had in your years as a leader of kayaking expeditions?
"Very tough to answer. Paddling through the Yasawa Islands in 1982 in a fiberglass double kayak that I had built and cut in half and carried from Canada to Fiji was very special. The interaction with kids and people who had never seen a kayak, a clear plastic drinking cup, portable stoves, was lovely. 2-3 weeks of camping and paddling, all self contained.

In the polar regions it is tough – paddling amongst the big icebergs in Greenland is amazing, watching sunrise on Rode Island in Scoresbysund, as is watching a bear stalk a seal, race across the ice, dive into a seal hole and come up with the prize. We had a special evening last year in Antarctica south of the Lemaire Channel. People were camping on shore so it was after dinner. Calm conditions and cold but a few of us paddled in a setting sun with the sound of pregnant Leopard seals reverberating in the background. A low trilling sound that carries around you not unlike thunder but with no wind it was very special."
And lastly, what can you tell people who read about all these trips with fascination, but think it’s probably not for them?

"I think most people benefit from the act of making a decision to go to one of these “hard to get places” knowing it is expensive and having to save or prepare for others who are just busy just make the time to do it. I have had numerous “busy” people who have had a life changing experience on a paddling trip. Where they make a conscious decision to ensure they have some time out each year. And even more importantly- that they realize how valuable it can be to help provide that opportunity for their children or spouses to experience something similar. AWAY from computers, telephones, texting and all our other daily distractions.
Once you get “out there” you will always want to try and do it again."
Thank you Al!
One thing for sure: if you you go on an Arctic kayaking trip, you will surely see an image like this one which I took from my kayak up close, and that really feels special! 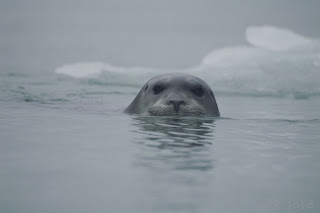 Intesting interview Eyal. We paddled around Hinchinbrook Is in Queensland with SSV (I think), Australia a couple of years ago and had a truly amazing trip around this sub-tropical World Heritage listed island.