Inside The Head of The Husky 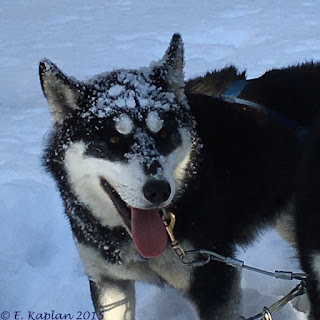 Who doesn't recognize a Husky? One of the world's most strikingly good looking dog breeds, the Siberian Husky was originally bred in northeastern Siberia by the local Eskimos. 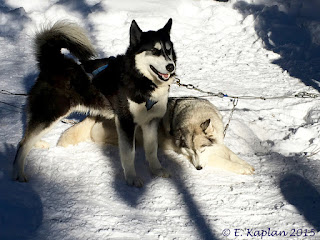 The Husky incorporates two often contrary characteristics: it was bred to be a working dog, pulling the heavyweight sleds of the hunters during their winter travels. As such, it is a very tough, determined, mission focused, running-freak dog who would do anything to become leash free and roam as far as it can. Give Chloe, my own Husky, some fresh air and a view of nature stretching till the horizon, and she's at her nirvana. 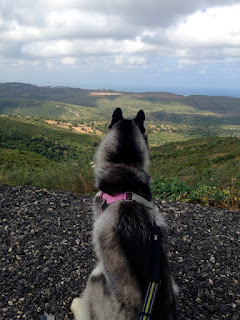 But the Chukchi, the northeastern Asia Eskimos who first bred the Siberian Husky, also put them in charge of guarding and babysitting their children. In those days in the Arctic, man depended on the dog as much as the dog depended on the man - and that shaped the relationship-DNA of the Husky. As a result, the Husky is extremely friendly and gentle with people, especially children, and many owners would swear their Huskies can literally read their moods. Here's what Chloe goes through during routine walks at her neighborhood: 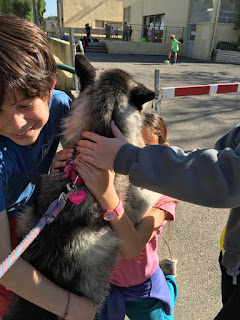 For most people, the name Husky implies a sled dog. And while the Siberian Husky isn't as fast as its cousin the Alaskan Husky, or as tough as the similarly looking Malamute, it can pull more weight over longer distances. Without sled dogs, none of the early Arctic and Antarctic expeditions could happen, and the survival of the Arctic native would be impossible. 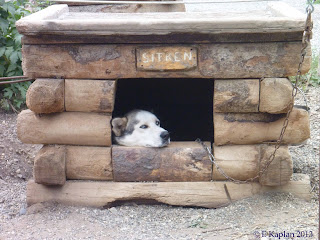 Huskies and other sled dogs' true joyful season is the winter, when the ground is covered with snow and they're tasked with running and pulling, pulling and running.

But even in the far Arctic, about half of the year there is no winter, hardly any snow on the ground, and the Husky must employ other ways to stay in shape. In Alaska, they are often tied to a regular winter sled, sometimes with wheels, and just run dragging it on the bare ground. 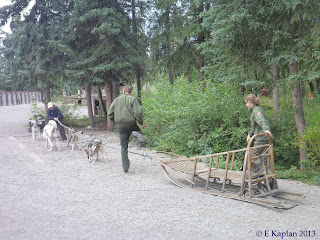 The Canadians are tougher with the dogs and make them pull their ATV. An easy training session? The ATV is in neutral. A more demanding one? Put the ATV in gear (with the engine off), and let's see the dogs working real hard! 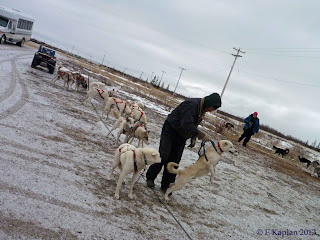 Huskies work in teams and have roles just like in a football team: they have the quarterbacks, usually two very smart, fast thinking dogs at the front of the pack, whose task is mainly to set the pace, look for the safest path and avoid cracks in the ice; they've got the runners, who can run and run. These are the dogs with the nicest butts, because right behind them are the pullers, the dogs who bear the heavy weight of the sled, its human rider, and all the load - and pull until they're told to stop. The dogs are assigned their roles while still puppies, and a good breeder can tell what they'll become at less than two months old!

But with the first sign of snow, the real show begins! Just as we are excited about the start of the ski season, the Husky can smell the dog-sledding in the air. The DNA in every cell in its body starts shaking with excitement!

And when the opportunity to start running is there (in this clip behind a snowmobile) - there's no stopping the excitement! Turn the volume on your speaker up and watch:

Is it fun to be part of it? You bet! Are they running fast? Well, the huskies usually try to keep a pace of about 10-12 mph (15-18 kph), and they can run like this for almost 100 miles straight, if necessary. (And yes, they pee and do the other stuff while running, in case you've ever wondered whether a male Husky can run three-legged, with the forth one lifted against a virtual tree)

But if they need to, they can run at 25 mph (almost 40 kph), and stay at that for more then five miles (or until they catch that cat or snow rabbit). Because the dogs need to listen - and obey - to their master, Huskies' ears are like radar antennas: with a whisper from behind, their ears seem to be turning 180 degrees backwards.

Riding the sled, it's a great experience, exhilarating and calming simultaneously.

But what would a Siberian Husky do when there's no snow at all? Certainly not stop running. And certainly with every piece of its DNA saying "run at the front, pull, focus forward, but match your pace to your leader the human". Perhaps this is why Chloe, my own Siberian Husky, gets so much thrill out of running just like that over dust covered trails:

Happy Festive Season! Thanks for sharing your icy adventures, perspectives and beautiful photographs throughout the year.

Your post is very helpful, thank you. Huskies are known for being very active animals, so it’s important that they have the right amount of calories to keep up with their lifestyle. Despite their small size, they do need high-energy foods to get them through the day. See more http://dogsaholic.com/food_treats/best-dog-food-for-huskies.html

To ward off the ferocious animals he might encounter, he has a rifle and behind him, his team follow tentatively. Each member clutching a rifle as if their life depends upon it. Our website