Spring Comes to the Sub-Arctic 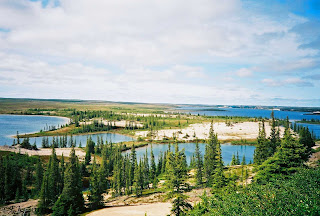 Yes, at one point spring does arrive up north and slowly melts the snow and ice. When this happens, you get to see thousands of miles of barren landscape, often with no human life in sight.

This post is dedicated to the Thelon Wildlife Sanctuary which is a huge park in sub-Arctic Canada. The Thelon River flows for thousands of kilometers until it meets Hudson Bay. It is a prime target for hikers, kayakers, and canoe paddlers. It is home to few people and many wildlife. I did a hiking and canoe trip there several years ago and would go back any time!


To get to our base, we flew on a little plane which landed us in what seemed the middle of nowhere. Yet as you can see I managed to keep on the good spirits! (click on any photo to enlarge it) 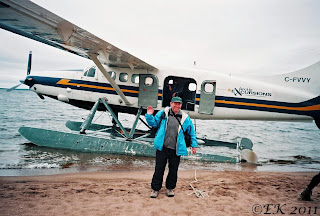 From there, we proceeded to our new, temporary home. Don't the tents seem comfy with a lake view? We even had hot (solar) showers! Just before I went on this trip, a good woman-friend of mine announced to me (when I was bragging where I was going) that she could take anything so long as she could take a hot shower at the end of the day. I thought I would never go on an Arctic trip with her! But then, I got to the Thelon camp, and saw the solar showers. Later, when I met her, I told her about the trip and said that I thought about her in the shower. She gave me a weird look, I'm not sure why. 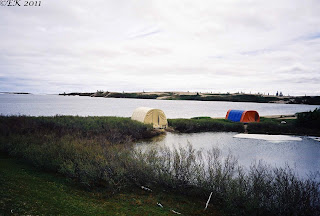 So, you wonder, what does one do on such a trip with a group of ten other strangers? Well, you hike a lot on ground that looks like it had just thawed after a long winter: 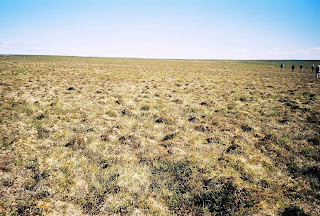 I promise you it's very nice to hike and know you might be the only people within hundreds if not thousands of miles...


Of course, you see some cute animals like this sub-Arctic bunny: 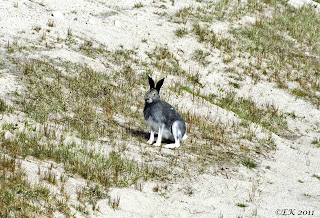 And the ultimate Arctic mammal - the Musk Ox. Muskoxen have been around for many many years, perhaps among the most ancient animals in that region. The are considered quite stupid, but are certainly very strong. No predator can cross an angry Musk Ox waiving his head and playing defensive lineman.  Usually, when the Muskoxen sense danger, they form a circle with the weak and young inside it. But what happens when there are only four of them? They form a line, with each two looking at the opposite direction! Isn't that cool? Ready to kick that bear's ass! 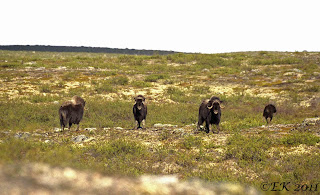 What are they all, from bunnies to Muskoxen, afraid of? In the Thelon region, it's actually more about Arctic wolfs than bears.


The Arctic wolf is a loner, very skilled predator. They would hunt in packs but also alone. A single mail wolf, along with his "domestic partner" and their puppies, holds a territory larger than 10 by10 miles. It is very hard to watch them and on that trip, we spent hours sitting on hills waiting for the White One to show up. But when one does, it really is a special moment. 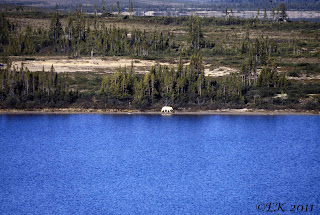 Especially when they come closer and closer. 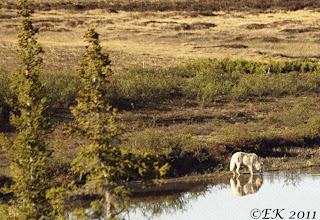 To read more on why I love the Arctic so much, read my post  So What About This Arctic Bug?

She looked at you weird because her female intuition told her a good looking guy like you doesn't need to promose a trip the Artic to get her to join you in the shower.
Peter S.