A Tent with A View 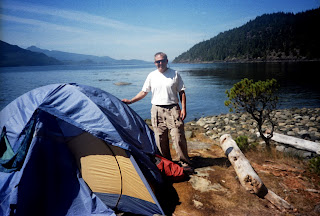 (click on any photo to enlarge it)
Each year, thousands, maybe even millions(!) of men are asked to pack up and go ("you can sleep in a tent").

NO! What were you thinking? That my blog has turned into some middle age, bitter dude's place of expression? I meant go camping, of-course! Spring is just around the corner and camping season is gathering heat, so to speak.

And as every camper knows, you don't have to go to the end of the world (up or down) to find beautiful views; but then again, you should! Because nothing beats the following view, for example, right from your tent, in Alaska: 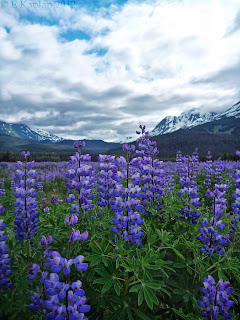 Or even at the Bowron Lakes Canoe Circle in BC, Canada, where you can wake up next to the canoe and never wonder how you got there! 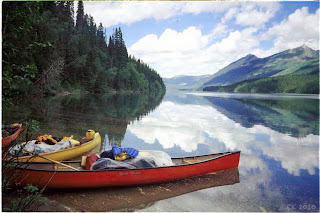 Camping gets interesting when you go further north to the high Arctic, where the midnight sun is present for several months each year. Not only can you take a great picture like the following one, shot exactly at midnight: 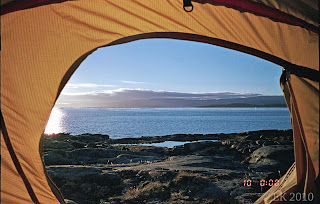 But you can also watch the beautiful Arctic Ocean, with ice floats and icebergs on it. Unless you time your trip to just a couple of years from now, when there will probably be no ice around places like Ellesmere Island in the heat of the summer... 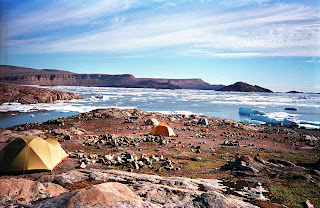 But until then, camping up in the Arctic can also give you a sense of how large these icebergs are when you see the whole of them, not just the tiny part above the water. I love the following picture, because it felt like camping in a parking lot of giant buses, feeling small and fragile... 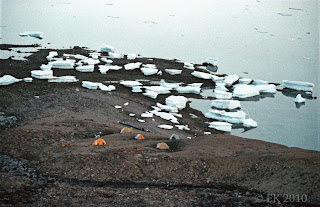 But who said you need a tent to camp? How about a big Back-To-Nature? in Antarctica, on a mild summer night when the temperature hits 30F/0C, and the snow is light, there's nothing like camping under the starry(?) skies. All I needed to do was dig a little foxhole, perhaps even build a low igloo-like wall, and there you go! 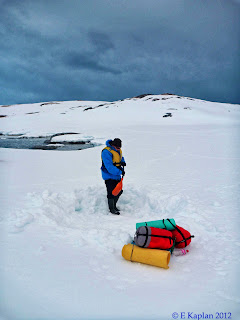 Yes - This is me digging. And yes - There are two sleeping bags there. Now stop speculating!

Lastly, if push comes to shove, and there are no tents, no ice, not even bare ground under you, that's still not a problem. There's always the giant canoe waterbed. I guess it's better used for an afternoon nap, but hey - That's important too, no? 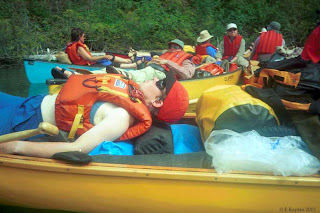 Read my post Alaska Summer Vacation for Ordinary People to see other interesting things to do when the outdoors calls you.

I love camping and I have been doing it ever since I was little and my father took me on every summer holliday :) But, since the start, the thought of a sudden storm, or a flood, kept me up almost every night. Luckily, as I got older, I started to get more interested in finding tents that are built for these unexpected forces of nature, and now, I can prouldy say that nothing can surprise me anymore and I sleep like a baby every time! :) In my research, I found an article that explained a lot to me and helped me realize the difference between the types of camping and the survival tents appropriate for these kind of situations. So, I would like to share it with you and hear your thoughts :) You can check it out here: http://survival-mastery.com/reviews/survival-tents.html

There are a lot of ways, tricks, and tips on how to maximize the capability of your tent. I really think the features can only be maximized if you know what you are looking for in a tent you are planning to purchase. I read some awesome tips and lifehacks here worth checking out: http://backpackingmastery.com/basics/tent-camping-tips.html